Vincent’s partner, Jane*, has been married to her husband, Simon* (45), an account manager for 18 years, and their relationship has been open for 2 years. Jane uses numerous poly friendly apps, including an OK Cupid account which is linked to Simon’s account, and a joint account with Vincent on Red Hot Pie—a dating app aimed at swingers. “We have a profile set up—as the two of us,” says Vincent. “It says that, as a couple, we are looking to meet other couples and people and things to expand our relationship group—to add a few more friends with benefits, that sort of thing.”

Jane also prefers meeting people more organically. “My personal experience is that dating sites are good for introductions,” says Jane, “But I can’t imagine them successfully setting up threesomes. The best threesomes I’ve ever had have been formed organically or circumstantial and they’re lovely because it wasn’t a case of someone picking someone out of a profile.”

She prefers the more poly-friendly dating apps that build connections as she feels unnerved with the focus on physicality on more “swinger-like” apps for threesomes.  “Men put measurements of their dicks up!” she says. “The thought of someone’s penis—it isn’t really even part of it for me. It says things like, “What’s your pubic hair like? And people put up: I only want to see shaved people, or I’m only interested in circumcised penises!”

Jane prefers more detailed polyamorous dating apps like Ok Cupid as they showcase her “values, and my outlook and my political views and things like that”. She also finds it unnerving how people do not post photos of their faces on threesome apps. “People cut out their heads because they’re terrified of being discovered, so a profile for a couple will just be abs and boobs, abs and boobs, abs and boobs! Vincent and I are unusual because we actually show our faces!” She says that after you match with a couple you’ll typically exchange photos privately. “You would think that private photos would be all sexy,” she laughs. “No! They’re their faces, because that’s the most private thing about themselves—their faces!”

Darnell has numerous clients that identify as polyamorous or have open relationships and she finds that the majority uses polyamorous dating apps, or mainstream ones. It is hard to talk about a typical dating app experience, she says, as there is such a broad spectrum of people identifying as non-monogamous, whose needs can range from polyamorous people forming emotional relationships to hardcore swingers. “Not everyone is wanting to have cups of tea and talk about their feelings,” laughs Darnell. “People want to fuck.”

She would recommend that her clients use apps to connect with others. “I would say, if you are trying to find like-minded people interested in exploring the stuff that you are exploring, apps are the way to go, as its accessible and it’s easier than sitting around a pub hoping that the right person walks in. 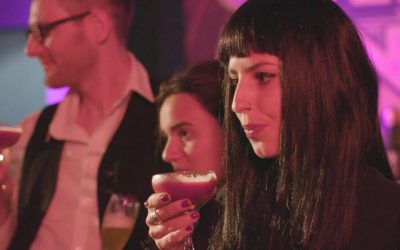 What happens at polyamory events?

“The most memorable things were the variety of people and how open and friendly people were. Without the creepy sleazy factor you get at a normal bar.”